An air filter in the form of a stunning and powerful plant – that’s Spathiphyllum. It has strong air-purifying properties, flowers abundantly and is also easy to care for; what more could anyone want? A long life? Tick: Spathiphyllums last very long time!

This South American powerhouse was introduced to Europe in 1870. You can recognise the plant immediately by its upright flowers that are always white. Each variety has its unique characteristics, such as the size of the flower or the size and shape of the leaves. At Van der Voort Potplanten Spathiphyllums are available in various pot sizes, leaf shapes and flower sizes, so the plant always matches the customer’s requirements.

How to care for a Spathiphyllum? Place the plant in a moderately light or shady spot in the home or office. Definitely not in direct sunlight! The ideal temperature is between 15 and 23 degrees Centigrade. Keep the soil damp by giving plenty of water approximately once a week. A layer of water at the base is perfect! And add some plant food once a month, to help this powerhouse enjoy an exceptionally long life!

Spathiphyllum flowers for some four to six weeks, and then needs a few weeks rest to develop new buds. 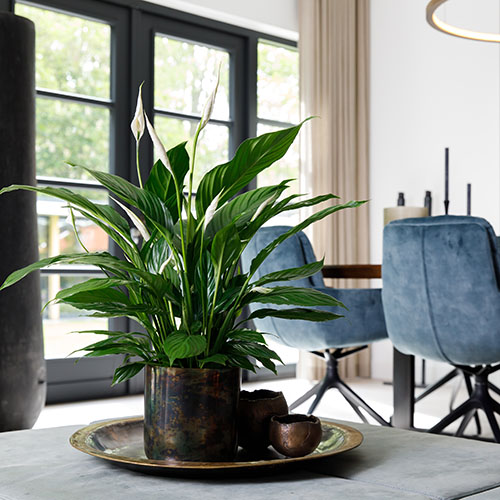 The versatile Azalea allows you to bring style to your home in an original way. Choose the colour that best matches your interior, and the Azalea’s abundant flowers will totally brighten the room or office.

People have had a loving relationship with the Azalea – the flower variant of the Rhododendron, which people know as a shrub – for centuries. We can read about the Azalea in Chinese literature as far back as 1578. This jack of all trades was brought from China to England in 1806 and cultivated. The plant is produced from late summer until spring, with a peak around Christmas. So it’s a real seasonal classic.

How to care for an Azalea? Provide enough light, but be careful of excessive heat. That will cause the plant to droop. So pick a nice cool and light spot for your Azalea, and give it plenty of water regularly. Briefly immersing the soil in a bucket of water is also fine. Azalea likes to be moist, but not drowning.

For amazing flowering it’s best to give plant food twice a month, and use special acidic potting soil when transplanting. If the plant gets too big for the room, plant it in shady acidic soil outside. 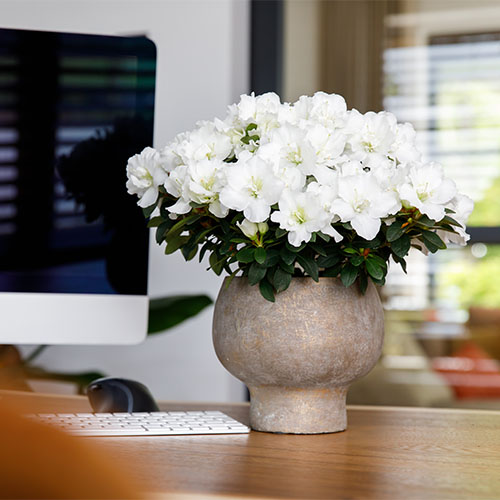 View our range on Floriday

About us
Sustainability
Collaboration